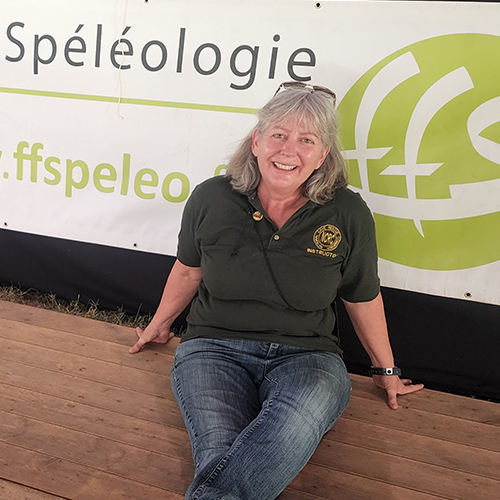 Pat became passionate about caving after taking what was then called “spelunking tours” (now called off-trail tours) in Wind Cave National Park and Jewel Cave National Monument in South Dakota. She became involved with the local caving community after finding a message in a bottle at a gated cave in Colorado, inviting her to attend a meeting at a local grotto (caving club) to learn more about caves and caving. She quickly became involved in the exploration and mapping of caves. (And yes, she did get into that gated cave.) On an expedition into Lechuguilla Cave in Carlsbad Caverns National Park, she realized a childhood dream of becoming an explorer. Her work in Lechuguilla introduced her to the national and international caving communities. It has been a “downhill” ride ever since.

With a Master’s in animal behavior, which came in handy while running caving expeditions, Pat has assisted with various caving events and rescues. Herding cavers is kind of like herding cats. She has been a national level cave rescue instructor for the National Cave Rescue Commission (NCRC) since 1998, serving as an instructor for the Eastern, Western, Southwest and Rocky Mountain Regions of NCRC, she has taught throughout the US. In addition to cave rescue, she was a member of New Mexico Search and Rescue (SAR), serving on the Eddy County SAR Team for 11 years. She served as Incident Commander and as Section Chief during missions.

She became involved in managing expeditions and worked closely with the National Park Service (NPS) in the stewardship of caves during expeditions and other activities. Because of her work she was encouraged to go back to grad school to get a PhD in caves, caving, and cavers. At the recommendation of then NPS National Cave and Karst Resources Specialist Ronal Kerbo she conducted her research on the “Idea of Cave Wilderness” looking at what it might be, what it could be, and what it should not be in the eyes of the caving community and local community members for Mammoth Cave and Carlsbad Caverns National Parks.

Pat has worked in a variety of fields including zoological gardens, business management, and oil and gas. She has a side gig as a licensed massage therapist, which comes in handy for her caving friends, but not so much for her.

Her long history of volunteer work with the National Park Service, US Forest Service and Bureau of Land Management goes back to the start of her caving days. The majority of her volunteer work has been with the NPS including work at Wind Cave, Mammoth Cave, and Carlsbad Caverns National parks, and Lava Beds National Monument. In 2018 she began full time employment at Lava Beds as the Cave Resources Specialist / Physical Scientist. She was responsible for cave related monitoring activities, survey and mapping activities, work with research scientists, interacting with the cave community on local, regional and national levels, SAR Coordinator, vertical training, cave rescue training, gear management, and other cave and surface related activities.

Pat is a life member of the National Speleological Society (NSS). She was made a Fellow in 1999 for her service to the NSS in various positions for its annual conventions and in other capacities, and served as a director from 2014-2017. She is an Adjunct Secretary of the International Union of Speleology, a non-profit with a mission to develop and coordinate speleology in terms of science, culture, fellowship and economic impacts.